Strength in Numbers Builds in Strength

As I ended my talk at the IMBAx event last Friday at the IMBA World Summit, I concluded with:

“I believe our strength is in our numbers.

I believe we can empower voice and strength with young women labeled victims, because as I know firsthand, a victim is only a victim if she believes it.

I believe a mountain bike can be the vehicle to create a ripple of change in our communities.

I KNOW that one woman can make a difference.  I know that once voice matters.  But I also know that our strength IS in our numbers and together, we CAN pedal a revolution that can change the world!”

As we lay the foundation for the development of our domestic program, Strength in Numbers, one thing has emerged – our desire to partner with companies that lead with soul, and ethics, and passion. Companies led by founders that believe that the bottom line is only part of the goal, but that what we do in our communities to create change, is what we should be striving for.

END_OF_DOCUMENT_TOKEN_TO_BE_REPLACED

This Saturday, the short documentary film, MoveShake, premiered Shannon Galpin: A MoveShake Story on the big screen of Adventure Film Festival in Boulder. A story of determination of a life dedicated to raising the voices of women and girls in conflict zones like Afghanistan, and as her role as a mother of a seven-year-old daughter.
END_OF_DOCUMENT_TOKEN_TO_BE_REPLACED

Next spring, after four years working in Afghanistan, Mountain2Mountain will launch it first domestic program, ‘Strength in Numbers’, in the United States, targeting young women at-risk, female military veterans, and violence survivors. Utilizing the bike as a vehicle for social justice, beyond traditional bike donations, instead considering mountain biking as a seed for cultural exchange and self-determination abroad and at home.

‘Strength in Numbers’ is an evolution from our ongoing work with women and girls in Afghanistan and our founder, Shannon Galpin’s, own personal experience as a victim of violence, and her continued push on gender and cultural barriers by becoming the first woman to mountain bike there, a country where women are not allowed to ride bikes.   The first program will launch in spring 2013.

END_OF_DOCUMENT_TOKEN_TO_BE_REPLACED 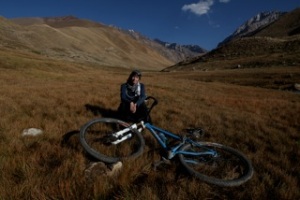 This October, the Panjshir Tour rolls into several cities – grassroots, community bike rides that supportMountain2Mountain’s work with women and children in conflict zones. This is the second year of the Tour, based off my experiences mountain biking in Panjshir province of Afghanistan. Yup, Afghanistan.

Countries like Afghanistan don’t culturally allow women on bikes right now, and while our project focus is targeted towards women and girls, its not about getting them on bikes, Rather, its about using the bike as a vehicle for social justice and change for women’s rights. It’s a subtle difference, but a powerful one. Mountain2Mountain’swork is advocacy, education, training, and cultural outreach. We aren’t trying to rashly push on cultural boundaries unnecessarily over there, but we can use the bike back here as a tool to affect change in increments that are sustainable.

Thus the Panjshir Tour was born when I rode across the Panjshir Valley last October, and riders in eight communities rode with me in solidarity for women’s rights, using their sweat equity to help raise awareness and funds for our projects. Rides like the one in Saratoga Springs, New York which was spearheaded by 11-year-old Reese Arthur around her neighborhood with her fellow students, or the one in Washington DC that started at ended at previously designated women’s prisons during the suffrage movement. The deaf university, Gallaudet University in Washington DC hosted a campus ride knowing it would benefit our work with the Afghan National Association for the deaf as we work to build a school, and cruiser bikes hit the beach path in LA in an impromptu ride.

Countries like Afghanistan don’t culturally allow women on bikes right now, yet my experience riding across the Panjshir Valley, as a foreign woman, on a bike was met with friendly curiosity and often incredulity, but never animosity. The interactions created by their curiosity led to endless conversations and questions about my purpose there and my work in the area, and often concluded with requests to visit their village, or offers to join their family for dinner. The gracious tradition of Muslim hospitality to travelers firmly in place even in a country enduring nearly forty years of conflict.

It was my goal to challenge perceptions and invite conversation on both sides of the equation. Challenging the stereotypes of women and Americans in Afghanistan, while challenging parallel stereotypes of Afghans as a people and as a nation in the United States. Bridging cultures and communities on two wheels.

Women that I know that lived and worked in Afghanistan in the 60’s as part of the Peace Corps rode their bikes daily to and from work – a far cry from the security lockdowns and convoys required today. Women like Dervla Murphy pedaled solo across the entire region prior to the Soviet’s invasion. We all know the power of the pedal. Connecting communities, reducing our carbon footprint, improving our health, exploring new cultures, and in third world countries the list grows to social issues like increasing access to education and healthcare, and decreasing violence against women. Pedal power indeed.

It is this pedal power that sparked the Panjshir Tour in cities like Los Angeles, Denver, Minneapolis, Saratoga Springs, Santa Rosa, Portland, and Washington DC.

Actor and bike advocate Matthew Modine expressed his support of the Panjshir Tour as honorary co-chair of this year’s event stating, “The women and girls of Afghanistan deserve our attention and support. This is not a women’s issue or an Afghanistan issue. Its a human rights issue. I want to encourage everyone with a bike to use it as a vehicle for social change by coming out and riding with us and showing your support for gender equity and opportunity for women and girls all over the world”

By coming together with our bikes, we can fight for justice, we can battle for change, and we can do it one pedal stroke at a time.

Come join us this October, or start your own grassroots ride in your community. Get pedaling and get involved! 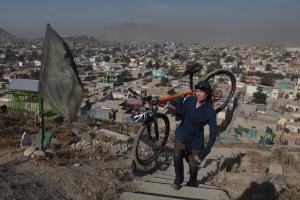 On October 3rd this year, my birthday coincidentally, I became the first woman to mountain bike in Afghanistan.   The irony of accomplishing something like this was that it started out so simply….each trip I’ve spent in Afghanistan I’ve longed for my bike.  The goat trails, the dirt roads, and the incredible mountains scream out to me to get pedalling!

The non profit I founded, Mountain to Mountain, is focused on women and children’s education and empowerment in remote mountain communities, in particularly in Afghanistan.  Yet a large part of our ethos is connecting communities and cultures.  I have come to realize that being the founder of a non profit and a mountain biker is not necessarily mutually exclusive.

So this trip, I made the decision to lug my trusted steed on the arduous journey from Colorado to Kabul.  Mountain to Mountain becoming quite literal as my Niner biked its way through Singlespeed World Championships in Durango, Colorado on a Saturday, only to be packed up, still dirty, to join me on a series of flights to Afghanistan the following week.

It wasn’t intended to be any sort of record creating, being the first at something, kind of excursion.  It’s simply a way for me to do what I do, in a country that I love, and perhaps change a few perceptions about what women can and can’t do in the process.  After some googling and researching, we discovered that no other woman had done this.   Not really surprising as this is Afghanistan we’re talking about.  Women don’t ride bikes here.  Foreign women try to stay relatively low key.  For good reason.  Between the land mines, suicide bombers, the Taliban, and the usual crap against women that exists in many Islamic countries, mountain biking isn’t high on anyone’s (male or female) priority list.

I decided to ride my bike in two provinces of Afghanistan, which happen to be two of the provinces that Mountain to Mountain is working in…connecting our mission with our ethos.  Education and cultural exchange.  Couple that with my desire to break barriers and crack open the long held stereotypes that pigeon hole women in many regions of the world, it was a no brainer.  The long term vision being that this trip I challenge perceptions and stereotypes on both sides of the coin.

Westerners assume Afghan men won’t accept women on bikes, because no women do it.   Truth, many won’t and don’t.  But the majority we encountered not only tolerated it, but chatted with us, joked and supported it.

Afghans expect that Westerners are too scared and too closed off to come out of their NGO and military compounds to interact with them and their country.  Westerners (including many that live and work in Afghanistan) assume you’ll be shot dead or kidnapped the moment you leave the confines of your secure car or compound.  I try to do my errands on my own whenever possible via walking or motorbike. I walk in the markets, stay in residential neighborhoods, and often conduct my daily errands alone so that I can take the time to connect with shopkeepers and security guards.  I buy my naan bread from a local baker round the block, have learned where to buy fresh yogurt measured out into a plastic bag and sold by the weight.

Mountain biking is just another extension of that desire to interact with Afghans more fully by doing what comes naturally.

Now this is not to say, it is without danger, or that all men would tolerate this.  There are men, especially in other, more conservative provinces, that wouldn’t.  I am fully aware of security concerns and am not ignorant of the risks I take by exposing myself on a bike.  I chose and discussed my location choices carefully.  Baby steps were taken on remote mountain paths and dirt roads before riding my bike through a village.  There are still areas of this country where I couldn’t step out of my car without a burqa on.   Areas where foreigners of either sex, are at risk, simply by trying to do their work.   Assassinations and kidnappings still occur and foreigners are not trusted.  But there are areas where genuine human interaction and cultural exchange are not only possible but desired.

Yet as I’ve said many times before, if no one ever does it, it will never change.  Its my own version of:  “Just because that’s the way things are, doesn’t mean its the way they should be.”