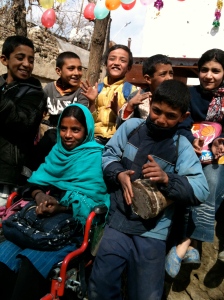 No group of children are more at risk in Afghanistan than the streetchildren.  These kids work the streets selling gum, maps, and a smokey good luck in a swinging incense burner.  Some wash cars, clean shoes, and run errands for pennies for owners of market stalls.  The enterprising ones, like the bold as brass kids that run Chicken Street in Kabul, stride up and offer their services in a variety of languages.  Don’t want gum or a map?  They’ll shine your shoes.  Looking to buy a scarf?  They’ll escort you there and stand guard outside.  Checking your  Going into the kebab shop?  They watch your motorcycle and keep the other kids from messing with it.

They’re sweet, spunky, and frankly sometimes overbearing and annoying when they swarm your car, incessantly knocking and begging.

These kids are the ones at the greatest risk in any city.  In Afghanistan, the risk is heartbreaking.   Mountain 2 Mountain is working with two centers for streetchildren run by an Afghan organization that we already work with in the women’s prisons.

One of the centers is hidden behind a non descript doorway in between two repair shops.  A dark, mud hallway emerges a dirt courtyard and a ancient small building that houses 2 classrooms and two offices.  The center  runs classes for children aged 7-18 from grades 1-5.   We provide a doctor on site two days a week that can provide free basic healthcare, not just for the children, but for their families as well.  In theory, it sounds like any primary school in Kabul.

Until you hear the stories.

These kids not only work the streets, but often live on them, hiding at night with others to keep warm, safe, and share food together. Those that have families are often malnourished as well, their only meal comes from the simple one served at school.  They are often abused, victims of violence, and often carry small weapons themselves for defense.  Some walk up to an hour through the dangerous Kabul streets to and from school each day.   One young girl talks to us about avoiding kidnappers more than once.  Another is in a wheelchair, her spine broken when the ceiling in her kitchen collapsed during an earthquake.  Her brother pushes her to school and back each day.  Amazingly her spine was broke, but not her spirit.  She smiled widely, and even broke into song for us when a classmate started playing the tablas (small drums).

The Afghan organization we partner with works with the families to ensure they understand why they should encourage their children to go to school, and conducts the school in shifts to accommodate the necessity of these children working the street for their survival.  In the office upstairs is a board that has all the confiscated weapons hung as testament to the change they are making in these 265 children’s lives.

This visit we visited one of the streetchildren centers on their graduation day, balloons were hung, children were singing, and it was hard to believe these are the same children that don’t have enough to eat or a place to sleep at night.  Each year, the grade five children have the opportunity to take a test that confirms their education level is the same as fifth graders in the standard government run schools.   35 children graduated this year and the center gives them a new pair of shoes, a school uniform, and some food at the ceremony.  We have agreed to sponsor their stationary and uniforms through their government schooling to ensure that they don’t drop out due to the lack of supplies which is often the case.

A pretty sad reason to drop out of school.  And a fixable one.

The children who graduated were all smiles and it was obvious they took great pride in their accomplishment.  I was thrilled to be given the opportunity to hand out some of the diplomas, squeezing their small hands with encouragement.

Our desire is to not just support these two centers but to work with them longterm to extend the program to year seven, re-establish a vocational apprenticeship program with local businesses, and to update to newer facilities in the future.   For now, we just need to support these two centers, keep them running and sustainable so that these kids have a future off the streets.

That’s not to say these stereotypes don’t hold water.  All of the above are prevalent and part of the daily life in most Afghans today.  The media shows us these images over and over and reinforce our perception that Afghanistan will never change.  It has only gotten worse in the thirty five years of conflict, and what hope is there to expect anything to change?   The mindset solidifies and the mainstream turns it back on what is perceived as a lost cause.

When we allow our stereotypes and narrowminded opinions to dictate how we perceive a region like Afghanistan, no real changes can ever occur.  Afghanistan is not a country that has always lived in the dark ages.  It was plunged into it by a series of conflicts and war that devastated families, infrastructure, and economy.  Studies show that terrorism blossoms out of extreme poverty and its understandable to see how the cycle takes root.  Terrorism and oppression feed off of poverty.  Lack of education breeds ignorance.  Eventually its hard to remember that things were ever different.

Afghanistan used to have tourists, and travelers explore its remote corners in the sixties and early seventies. The Hippie Trail went right through it.  Irish traveler, Dervla Murphy rode her bike through Afghanistan in the sixties, completely solo and unsupported. Many journeyed from the West to travel cheaply through Herat, Kabul, Bamiyan, and Mazar i Sharif, home to incredible architecture, culture, and the experienced the best of Muslim hospitality.  Thirty five years later, the Russians, the Taliban, and the ongoing offensive by international forces have made the country off limits to most except for military and aid workers.

It is interesting to note that in many cases, the elders are actually more liberally minded towards women’s rights and development than the youth.  The elders remember what life was like prior to the Russians and the Taliban.  In contrast, many of today’s youth have known nothing but war, poverty, and oppression.  They have grown up in a country where women are inferior, where boys get an education, but girls stay at home.  Where girls were publicly stoned to death for walking alone, for holding hands with a boy, or for any number of so-called honor crimes.

Today, this is a country full of Westerners working outside of the military and larger NGO’s, working, exploring, and having adventures. They have tapped into the youth that want more than their country currently offers.  This is a country where Skateistan launched a skateboarding initiative to introduce the sport to the youth. Where two hundred girls now play soccer, in public, at the Kabul Stadium where just a decade ago they would have been stoned to death in the same location for daring to play. Where a French aid worker, is trying to launch a yak train adventure business to take travelers into the remotest of remote, the Wakkan. Where an Aussie photojournalist and his two friends started the first motorcycle club. Where the most popular television show is Afghan Star, an Afghan “American Idol” style reality show.  Where two Afghan mountaineers made a first ascent on Afghanistan’s highest peak. Where Afghanistan’s first Afghan rock band, Kabul Dreams is breaking away from traditional music.  All of these made possible by the support of individuals and organizations that realize that there is more to aid development that only schools and infrastructure.

This is a real country, with real people, with a real youth movement. Just because there is daily violence and a ongoing war doesn’t mean that real life doesn’t continue, that normalcy should be encouraged, and that we can’t interact with Afghans in ways that don’t involve guns.  In fact, considering the 35 + years of conflict, its all the more reason to galvanize the youth out of their apathy and support those youth movements that are burgeoning.