For the Love of a Bike

Do you remember your first bike?  Odds are, you remember distinctly the color, the shape of the seat, it may have even had a name.  Mine was a  bright blue Schwinn.  It was stolen off my front porch a few months later and I was heartbroken.  My second was pink with a banana seat.  I was careful not to leave it on the front porch and it was my faithful friend until junior high when I got my first steel blue ten speed.  Funny how bikes mark themselves indelibly on your brain?

This week in Afghanistan, I had the pleasure of giving 12 girls in Kabul their first bike.

First up was a visit to bazaar in the old part of Kabul to purchase some bikes that the girls could ride easily and that wouldn’t stand out – more than a girl riding a bike already does in a country that has never allowed females to ride bikes. 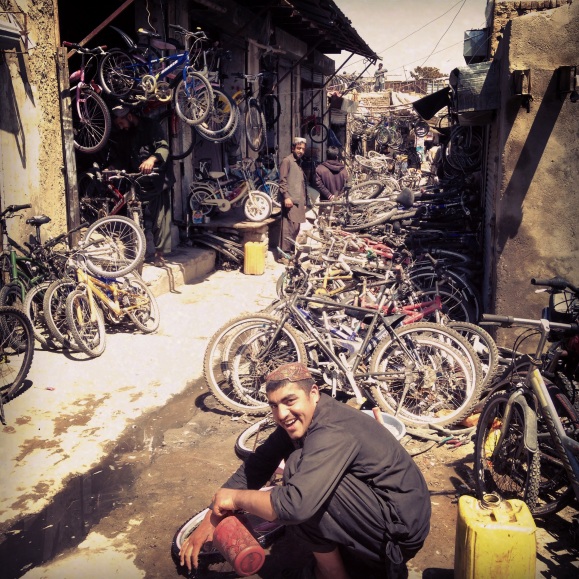 We pick up a fleet of the same bike in different colors.  We had the bike mechanic that worked with us to build up the donated Liv/giant racing bikes check them over and make sure everything was in working order.  Delivered them to Coach’s house and asked the girls to meet up for a team meeting. 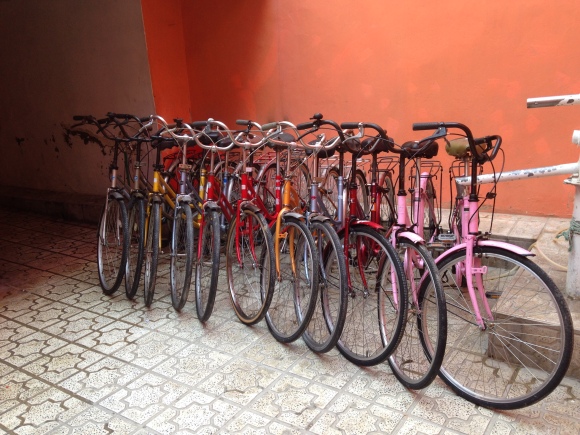 We handed out the bikes to huge smiles and laughter.  The girls have loved riding the new racing bikes and training, but none of them have ever had their own bike.  Each girl has assured us that they have a male family member that have agreed to ride with them as an escort, most cases a brother, but also a father and a step-son.  These girls are among the first Afghan girls to be riding bikes in Kabul socially.  Its the start of a revolution.  Girls on bikes.  Breaking the last big gender taboo.  We couldn’t be prouder.  Ride on ladies. 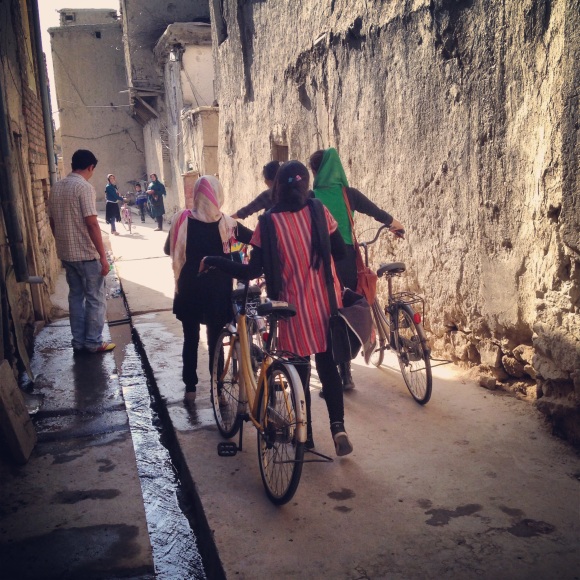 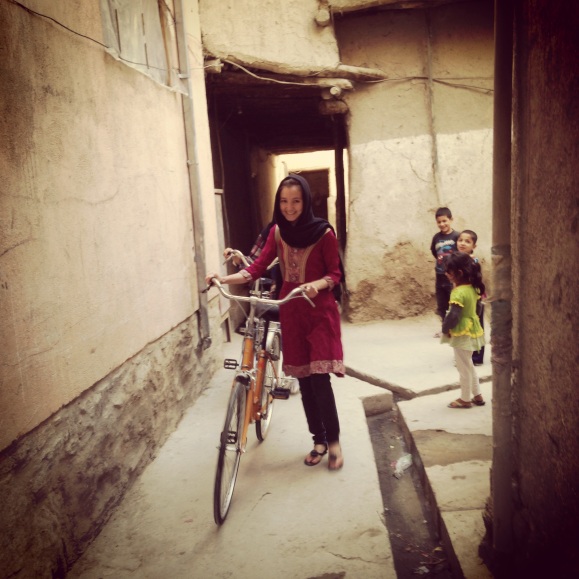 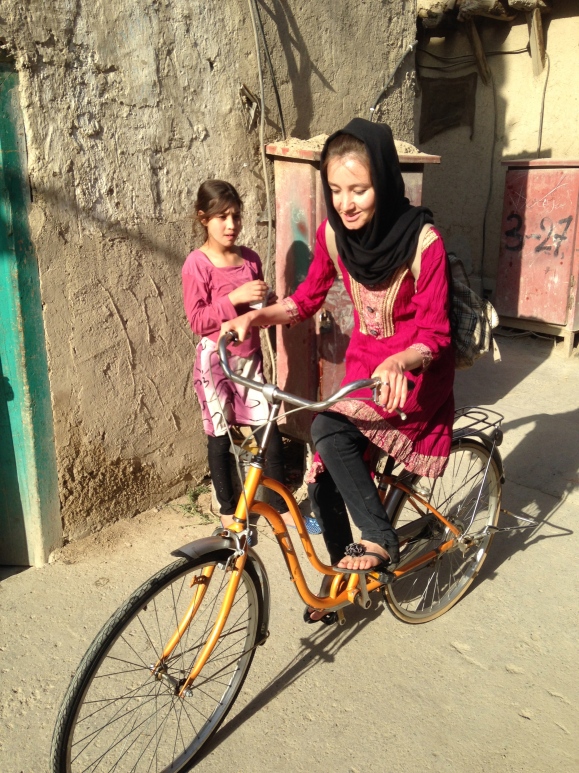 “It’s time to stop referring to Afghan women as weak, as helpless.  Its time to refer to Afghan women as strong, catalysts for change.  How can we expect Afghan women to fight if we continue to label them as victims?”  I said these words at my first TEDx talk two years ago – 9 months before I first met the Afghan National Women’s Cycling Team.  I had been working in Afghanistan and was enraged by the way we continue to look at Afghan women, and women like them around the world, as helpless victims that are in need of the West’s support.  These are not victims, although they may be victimized.  These are women of strength and resiliency that need tools, encouragements, and the outlets to use their voice.  2  1/2 years later, the young women I work with in Afghanistan show me every day they are not helpless, they are brave, strong, and fearless.  They simply need tools.  Or in this case, bikes. 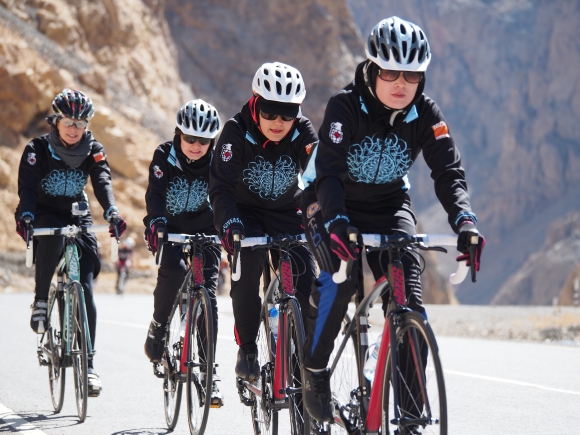 The young women of the Afghan National Cycling Team, and the young women around Afghanistan that are learning to ride bikes for the first time in their country’s history, did not grow up under a burqa.  They matured in the post Taliban decade.  They have taken advantage of opportunities in education, art, sport, and politics.  Many were refugees in Iran and Pakistan and returned here in 2002 and 2003 with their families.  Some stayed here and endured the Taliban’s regime.  Most are in their final years of high school or early years of university, a couple are married.  All are embracing the feeling of freedom that comes on two wheels. 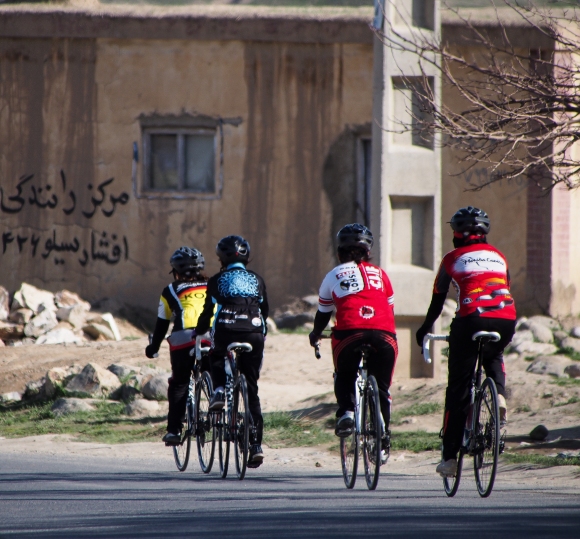 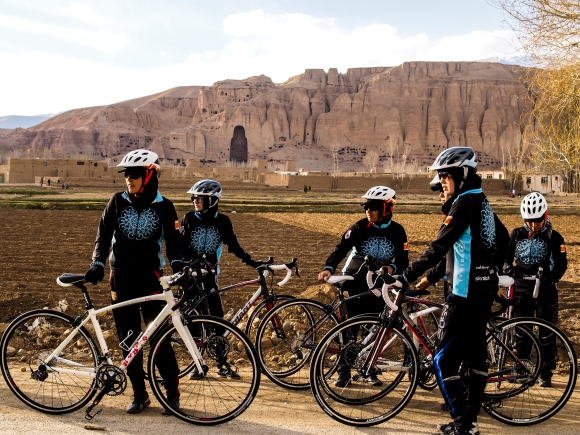 These women are the generation of Afghan women that are embracing new experiences, opportunities, without a specific intent of being revolutionary.   They know what they are doing is controversial, but they believe it is their right, that they deserve the same access and opportunities as men, and riding a bike should not be forbidden because of their gender. I believe sport is a natural gateway to social change.  As these women race and bring national pride to themselves, their families, and to Afghanistan, they are opening the door to allowing girls to ride bikes socially, as transportation.  Increasing access to school or work, protecting their safety, and improving their health.  Creating social justice and gender equality on two wheels. 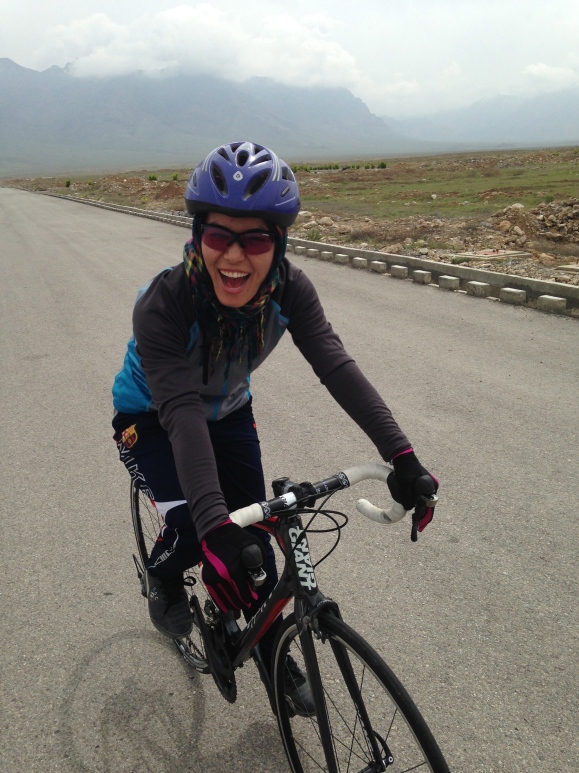 This year we went one step beyond the team’s support.  I spent a morning at the old bazaar to buy bikes for each of the girls to keep at home.  Their first ever bike.  Do you remember your first bike?  The joy and the freedom you felt riding it?  Young women are now teaching other young women to ride, and several ride their bikes as transportation in Kabul.  The first Afghan women to ever do so.  Crossing the bridge from sport to social independence.

Every day I worry about these young women.  Not just on the bike, but off.  They are on the front line in a gender and cultural war and yet, if they are willing to ride, to go to school, and to believe in a brighter future, I will do everything I can to support them.  On and off the bike.  Will you?  The support of the team has been minimal and it’s time to step up.  It’s time to support the women that are changing the future of their country one pedal stroke at a time.  We need to get them a minibus and bike rack to safely travel to and from training.  We need to support with stipends the national team so that they don’t have to quit the team to help support their families.  We need to support their racing and travel.  We need to pay for coaching training to build the internal infrastructure for the team to grow and flourish and compete ahead of the 2020 Olympics and future Asia Games.  We also need to continue to support the mens’ team so that they will mentor and support the women’s team and build both teams under the cycling federation as brothers and sisters. More importantly, we need to support the young women that are riding outside of the team – women who are using the bike to get to and from school, or to simply ride with their girlfriends on the streets.  Using the bike to literally take back the streets and their rights. Please help these women pedal a revolution.  Believe that social change can occur one pedal stroke at a time.  Know that these women, and women like them, are the future and their fearlessness needs our support.  Tashakur. Donate today. www.mountain2mountain.org/donation    photo credits: Top three – Deni Bechard Bottom two – Shannon Galpin

While I spent my first few days back in Afghanistan sorting out the bike delivery logistics from Kabul Airport Custom House, I took a day off to train with some of my favorite ladies, the women of the Afghan National Cycling Team.  Coach showed up with his usual assortment of steel bikes stacked on top of his Land Rover and to my surprise had lovingly packed three of the composite racing bikes I had brought last spring between layers of carpet.  This team needs a minibus something fierce!

Several new riders showed up including a trio of sisters driven by their brother because Coach’s car was full.  As per usual when I now join, Coach handed off coaching duties to me, which I find comical as I am a mountain biker, not a roadie, nor a racer, but my previous life as a sports trainer and my general knowledge of cycling and coaching, coupled with the base level these girls are riding at, means I seem to have some knowledge to impart.  This ride?  The peloton.  How to ride in a pack and not knock each other over like a row of dominos.  How to ride wheel to wheel without running over the girl in front of you by mistake.

And after some warm up laps, the girls started to get the hang of it and I learned a few new Dari phrases like;  ‘Nazdeek bosh’ – stay close together. ‘Dar buchoo’ – turn around.  And my favorite, shouted loudly and often, ‘Takar nako’, DON”T CRASH. 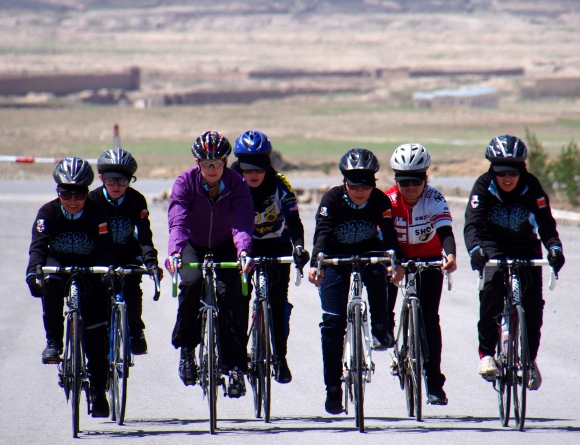 Lesson Two = ‘How to Corner’ coming up next.

In the end, it took a total of 18 hours over 2 days, visiting over 30 offices, gathering signatures, new forms, old forms, stamps, and drinking endless cups of green tea and make idle chitchat to get the myriad of paperwork completed for the Kabul Airport Custom House to release our 53 bikes donated by Liv/giant for the Afghan National Women’s Cycling Team.  #freethebikes became a running gag in my jet lagged state of navigating Afghan bureaucracy.  Seeing the final bike loaded onto the truck alongside Coach Sedique, head of the Afghan Cycling Federation and coach of the women’s team was worth every cup of tea.  Time to ride! 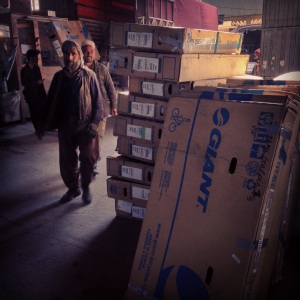 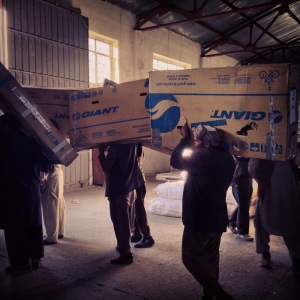 No Bike Left Behind

Today 53 racing and mountain bikes showed up in a semi truck.  Thanks to the ongoing endless winter in the mountains of Colorado that meant the driver wouldn’t come down the hill to  my apartment and hilarious one-woman convoy in my Element ensued – 4 bike boxes at a time into my landlord’s garage.  Its only a temporary holding space, in two days they fly with me to Kabul, Afghanistan.

Thanks to the incredible generosity of our partner Liv/giant – we have bikes, gear, clothing, tires, and helmets.  Along with an insane amount of donated cycling gear that has been accumulating in my home, this gear drive makes the last one look like a cake walk.  United has confirmed they will allow me show up at the passenger drop off with a 60 plus boxes, but they will not waive the extra baggage fees. We need to crowdsource the funding to get these delivered with us to Afghanistan so we can show the world that progress is still ongoing in Afghanistan, that women are breaking gender barriers amidst the turmoil of the elections, and we can pedal a revolution together!
Several years ago when I first started looking at the controversy of women and girls riding bikes this was the only image you would see of women on bikes. 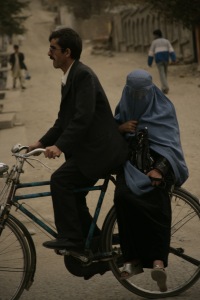 I would ride in various areas of the country and ask about the possibility of Afghan women riding.  The answer was always, ‘no’.  Cylcing is just not acceptable for women, and according to Human Rights Watch researcher, Heather Barr, its one step above the morality crimes that women are jailed for.  More women drive than ride bikes in Afghanistan.  Its THAT controversial.

But these women are THAT brave.  Today, because of Coach Seddiq and a handful of courageous young women, you have women riding as part of the Afghan National Cycling Team, representing their country in races in Pakistan, India, and with your help – in the upcoming Asia Cycling Championships in Astana, Kazakhstan.

I go back on Monday to deliver the bikes, gear, clothing with the goal of not just continuing to support the national team, but to start the first ever women’s mountain bike team and make plans for a future women’s bike race with the cycling federation.  This is truly a team effort and we need your help to support the team.  You can donate any amount, big or small to www.mountain2mountain.org/donation and you’ll be part of this two wheeled revolution!

Thank you and please, donate, spread the word, share this blog, and together we can show the world what women are capable of!

Gear Drive for the Cycling Teams of Afghanistan from LET MEDIA on Vimeo.